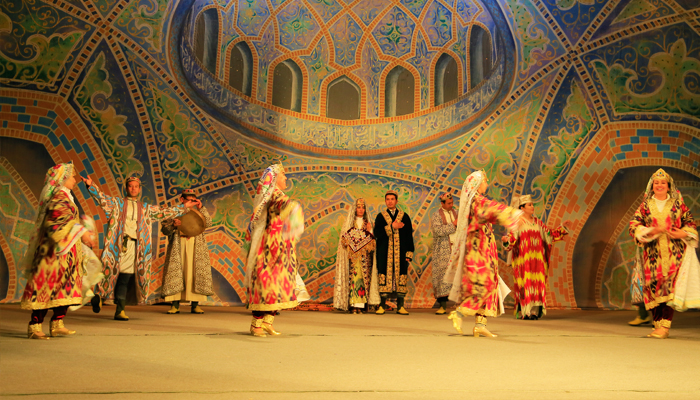 "Samarkandnomа" was shown at the request of the audience.

The folklore and ethnographic theater performance “S A M A R K A N D N O M A” performed by the Samarkand Drama Theater based on folk art was shown in the evening of January 18 at the request of many spectators.

Great performances were used in this show: “The Amazing Taimur Story” by Ibn Taymshah, “Tabari History” by Tabari, “Guiyos ul-Lugot” by Muhammad Giyudddin, “Zafarnom” Sharafiddin Ali Yazdi and Nizomiddin Shami “Zafarnome” and “Boburdinoma.” Based on the historical works of Tahirkhoja “Samaria”, he tells the story of folklore, weddings and costumes of ancient Samarkand.

It will bring together more than 30 leading actors, choral and ballet groups. Folk dance and songs will be presented in a theatrical manner. Samarkandnoma uses more than 200 dresses of all ages.

Despite the cold weather on the show on January 18, viewers were pleased to see that this show was reviving the spirit of history.